In moments of national turmoil, university campuses throughout recent American history have provided clarity and encouraged a return to the ideals that formed this nation. They have served as moral compasses, and have stirred the national consciousness in such a way that makes change inevitable. In Ohio’s Kent State University, it was the 1970 shooting of four students peacefully protesting the Vietnam War that shook a nation’s conscience firmly against the war. In the 1980s, women in college campuses in Pennsylvania organized the first “Take Back the Night” marches and vigils to lead a movement against sexual violence, after the murder of a young female microbiologist drew the nation’s horror. And in Columbia University itself, it was the firm insistence of seven students who launched a three-week demonstration and drew national attention to the injustices of the South Africa’s apartheid regime that facilitated a slow but steady divestiture of funds from the country’s most profitable industries.

Such a moment of reckoning is once again upon us. As the nation undergoes a particularly virulent strain of anti-immigrant sentiment, the lives of 800,000 young immigrants hang in legal limbo with US President Donald J. Trump’s September 5 rescinding of DACA, the Deferred Action for Childhood Arrivals program. DACA is a program that grants protection from deportation to people who came to this country as children, most of whom only know America as their home. To receive DACA protections, an applicant must have come to the United States before 2007, demonstrate that they are enrolled in secondary or higher education or working, and show that they have a clean criminal background, among other requirements. By all economic indicators, the program has been a success for these young immigrants and for the country: according to a recent study at UCLA’s Institute for Research on Labor and Employment, 84 percent of immigrants with DACA are employed. A study by the Center for American Progress further adds that 8 percent have started their own businesses, and 23 percent bought their first homes. In other words, DACA recipients are hardworking Americans who are actively contributing every single day to the only country they know.

The President understand this. As of September 14th, he admitted that DACA recipients are “good, educated and accomplished young people who have jobs and are serving in the military … and who have been in the country for many years.”

However, instead of searching for a solution, he has chosen to play politics with the lives of these 800,000 young people. To date, he has rejected three bipartisan proposals that would have given him the full wall funding-for-DACA trade that he claimed he originally wanted. Instead, President Trump has been pushed by anti-immigration aides to add poison pills, such as cuts to legal immigration – something he never campaigned on – to any legislation he will accept. DACA recipients are vehemently against the drastic cuts to legal immigration that he is suggesting, because it would effectively fund the deportation of millions of other immigrants, such as their undocumented parents.

Realizing that he is on the wrong side of history on this issue, President Trump has turned his efforts to blaming Democrats for his failure in leadership. As of March 19th, he claimed that “The Democrats do not want to help DACA. Would be so easy to make a deal,” despite cancelling DACA himself, and despite rejecting three bipartisan deals that met his original objectives.

No moderate compromise will be accepted by this Administration until they feel overwhelming pressure from the American public, which strongly supports the DACA program on a bipartisan basis. According to a recent Fox News poll, 80 percent of all Americans—including 70 percent of Republicans—favor a legalization path for DACA recipients. More than 400 business leaders signed a letter titled an “Open Letter from Leaders of American Industry” to the President affirming the importance of DACA youth to the nation’s economic vitality. Over 1,300 religious leaders are pleading for protections for these individuals.

Yet in this overwhelming support for a solution, a simple point is often missed: such an outcome would go against the spirit of the American experiment. When 800,000 individuals wrote down their physical addresses and phone numbers and submitted them to the federal government, they were entering into a good-faith agreement with their government that such data would not be used against them. For the government to take that information and use it to specifically to target those very individuals would be the very definition of cruelty. Beginning March 5, 2018, the government will be able to begin rounding up these DACA recipients, these individuals who pledge allegiance to the American flag, and deporting them to lands alien to them. Such an action would stain the nation and its foundations irreparably.

America is in dire need once again for its consciousness—its youth—to step up and bend the arc towards justice. Because many DACA recipients are our classmates, our coworkers, and our friends, we have a uniquely personal and urgent need to act, or risk being complicit in abandoning one of the most pressing issues of our time. To date, so far more than 560 presidents from higher education institutions have banded together to call on the President to allow these DACA recipients to continue working and studying. Some universities, such as Columbia University, have gone so far as to deny entry to federal Immigrations and Customs Enforcement, or ICE, officers who may try to enter the campus to arrest these individuals.

These actions are not enough for the times we are in.

In the fall of 1960, four young students sat down in their local campus diner in North Carolina A&T University, after a long day of classes. After waiting what seemed like too long for a cup of coffee, they realized that they had been denied service, and were being asked to leave because they were African Americans sitting in a “whites only” space. Instead of allowing this injustice to fester on, these students returned the very next day to request equal service. In the coming days and weeks, they would return joined by groups of 25 of their classmates, then 60, 300, 1,000, and eventually 1,600 of their peers supporting their cause, launching the Greensboro Four into the national conversation and eliciting hundreds of similar sit-ins nationwide. With their actions that day, little did they know that within five years, the landmark Civil Rights Act would become the law of the land in their country. It would make the type of discrimination they faced that day outlawed for all future students, thanks to their and the actions of their peers.

To earn a similar outcome for DACA youth, in one of the defining civil rights issues of our time, we must assemble the same broad-based coalition of students as past movements to bring this problem to the forefront of our national debate. Only by doing this can students once again draw the nation’s eye, and, soon, its lawmakers’ support, to lead the change that the country needs. 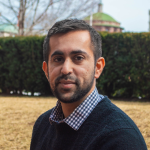